Recently listed buildings/structures in the borough 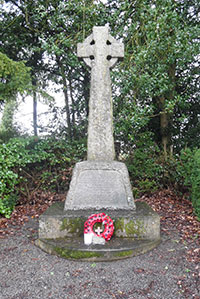 The most recently listed structures in the borough are:

This painted black welded steel sculpture of 1968 by Bernard Schottlander is located within the quadrangle of the Upper School at Desford (now Bosworth Academy). Bernard was born in Mainz, Germany into a Jewish family of art enthusiasts. He fled Nazi Germany in 1939, arriving at Leeds where he worked in a factory as a welder whilst attending evening classes in sculpture at the Leeds College of Art. He developed into an international and influential maker, industrial designer and sculptor and was commissioned for a series of public outdoor works, which includes the series No 2 sculpture, and the No 1 sculpture located at the University of Warwick (also listed at grade II).

The No 2 sculpture employs scale, colour and geometric shapes to create a striking and playful piece of outdoor sculpture, expressing the new abstract forms, ideas and materials of the post-war period. It is a strong example of the pioneering purchase and commissioning of artworks by the Leicestershire Education Committee for exhibition at schools and within the public realm in the post-war era. It has been listed at grade II.

Richmond Primary School was built between 1968 and 1970 to the designs of T Locke, E D Smith and J N Pitts of Leicestershire County Council Architect’s Department. It is the simplest and most dramatic example of a mature primary school designed to the Leicestershire Plan, expressing new ideas of learning through discovery instead of by rote (repetition) in its distinctive circular plan in which the library forms its physical and metaphorical heart.

The use of a very deep top-lit plan, instead of large areas of glazing from the sides, is a significant development in Leicestershire school planning, whilst the side-lining of the hall, another striking feature, is typical of the schools in the county. The plan form has survived well despite some alterations, and the sympathetic replacement of the doors and windows has preserved the original architectural character of the building. It has been listed at grade II.

War memorials are amongst the most tangible and precious reminders of the sacrifices made by communities during the conflicts of the twentieth century, made all the more pertinent in 2018 with this year marking the centenary since the end of the First World War. In recognition of this Historic England has resolved that over the period 2014 to 2018 it will greatly increase the number of memorials which are listed. The war memorials at Desford, Hinckley (St Peter’s Roman Catholic Church), Shenton and Twycross all hold special architectural and historic interest and have been listed at grade II.

The United Kingdom Warning and Monitoring Organisation (UKWMO) underground post at Stoke Golding was opened in May 1960 when the main role of the Royal Observer Corps (ROC) became nuclear reporting. As part of the network of subterranean posts designed to monitor radioactive fallout following a nuclear attack, it embodies the nation’s attempt at countering the threat of nuclear attack during the Cold War. Following the stand down of the ROC in 1991, monitoring posts were generally returned to adjacent landowners with many being levelled or infilled, so this is a rare and well preserved example surviving in its original form externally as well as retaining some original internal features.

Search the national heritage list (historicengland.org.uk) for more details on these listed buildings in England.