There have been changes to services due to the coronavirus pandemic. Please contact us if you require assistance. Get the latest service information, government news and business support and advice. 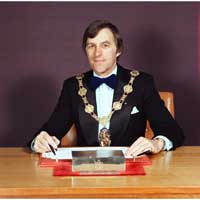 TRIBUTES have been paid to a former Mayor of Hinckley and Bosworth and long-serving Newbold Verdon councillor who has died.

Mike Preston served as a Conservative councillor for Newbold Verdon ward for 10 years from 1977 to 1987 and was Mayor of Hinckley & Bosworth between 1979 and 1980. Mr Preston also served on the former Market Bosworth Rural District Council before the Borough Council was formed in 1974 and was a member of Newbold Verdon Parish Council for many years, serving as Chairman for more than 15 years.

Friend, Newbold Verdon Parish Councillor and former Borough Councillor Joyce Crooks paid tribute to the former Mayor. She said: “Mike was very well respected and I always had great respect for his love of the village and his dedication to all things Newbold Verdon. He was a conscientious Chairman and as Mayor he carried out his duties with great dignity and charm. Mike will be very sadly missed and the Parish Council will look in the future to dedicating a memorial to remember the years of service Mike gave to the village.”