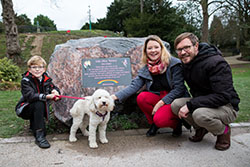 The stone was selected as a fitting memorial to the brave young campaigner by Isla’s family and installed in Argents Mead, a place Isla and her family loved to visit, play and enjoy. Argents Mead’s became the focal point for the community to pay their respects to Isla when she died last summer, with hundreds of people paying tribute to Isla by laying flowers and stones at the bandstand.

Isla’s #photo #post #rehide campaign, a creative pastime which grew into a huge social media campaign, continues to raise the profile of childhood cancers and DIPG, the cancer which Isla suffered from.

Isla’s Facebook page now has over 76,500 followers and family, friends and supporters who are now hoping to raise £73,000 to fund a dedicated ‘Isla Smiler’ DIPG Trial’s Researcher.

Isla’s family are hugely grateful to Aggregate Industries of Bardon Hill, who have generously donated the 6.2 tonne stone (the equivalent in weight of an African elephant!) and to local stonemason Kurt Russell who has beautifully scripted a dedication plaque for the stone.

This is a fitting memorial to Isla and it will serve as a lasting reminder of how she made a difference to our community. It also serves to remind us of the need for continued research to find a cure for DIPG and I have immense admiration for Katherine, Simon, and Harrison and the passion which they continue to have in working to fight the disease which took Isla from them.

I shall always remember the scenes in Argents Mead, the tributes around the bandstand and the colourful celebration of Isla's life, but every time I walk past this stone I shall remember the smile of Isla ‘Smiler’ Tansey.

Anyone who wishes to donate to Isla’s fund (justgiving.com) is welcome to do so.