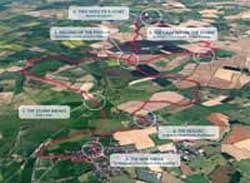 A unique sculpture trail is being developed to interpret and showcase some of the key moments in the famous Battle of Bosworth in Leicestershire.

Delivered by a partnership led by Leicestershire Promotions and supported by Hinckley & Bosworth Borough Council, the Bosworth 1485 Sculpture Trail will comprise a series of six significant works of art. The artworks have been specially-commissioned to mark the events of the battle when King Richard III fought for his crown and lost his life, and the subsequent impact on English history as the Tudor dynasty began.

The first installation, at Sutton Cheney church, will represent contemplation on the eve of the Battle, (The Calm before The Storm). The second (The Storm Breaks) represents the battle site and the third, at Stoke Golding, Henry’s victory. Dadlington church, where the remains of many of those who fell in the battle are believed to be buried, will be the site of an artwork about healing and reconciliation, and Bosworth Battlefield Heritage Centre will display an artwork representing archaeology and Digging up the Past. The Trail ends in Market Bosworth, highlighting the local market place where people in the past and the present come together for debate, storytelling and performance.

The Trail will span the fields and communities of south west Leicestershire including the rural communities of Shenton, Sutton Cheney, Dadlington, Stoke Golding and Market Bosworth, urban areas such as Hinckley and Leicester, and around the site of the Bosworth Battlefield Heritage Centre. The sculptures will be connected by a trail of 21km at its full length (walking) or 24.35km (by car/ cycle).

A spokesperson for Leicestershire Promotions, who conceived the project for the trail said: “The development of the trail has been overseen by a core group of supporting organisations to successfully focus on key elements of the project such as history and heritage, tourism, culture, education and public consultation and Rights of Way.

“The discovery and subsequent reinterment of King Richard III is one of the most widely reported historical stories in recent years. This new Trail will create an important new cultural and tourism destination for local people and visitors to learn more about the fate of Richard lll in one of the most significant battles in English history.”

As part of the Inspiring Bosworth project, young people will work alongside professional curators and artists, handling objects, exploring the local landscape and six key sites in the history of the battle, and collaborating on issues such as war, society, the role of women and the church, and their relevance today. Community groups will engage with curators and archaeologists in activities that will enhance the understanding of local heritage, the importance of collections and access to the natural environment.

Leader of Hinckley & Bosworth Borough Council, Councillor Mike Hall, said: “People come from around the world to visit our borough, to learn about the battle, the death of one king and the crowning of another, and this trail will provide a new way for people to experience the historic events of the Battle of Bosworth. I am thrilled that the grant has been awarded to add to the council’s commitment to the project and we are now much closer to seeing this dream becoming a reality."

Chief Executive of Hinckley & Bosworth Borough Council, Bill Cullen, added: “This exciting project will be of both national and international significance, engaging all those communities in the borough that had an historic connection with the battle. The success of this bid is a real testament to the tremendous partnership effort on this project."