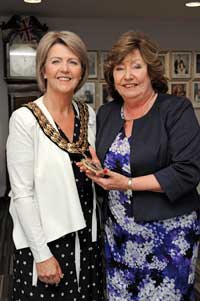 ONE of the highlights of the civic year took place at the council’s annual meeting last night (21 May) when a new Mayor of the Borough was installed for the next 12 months.

Councillor Lynda Hodgkins, who represents Hinckley Trinity Ward for the Liberal Democrats, accepted the chain of office from the outgoing mayor, former councillor Mrs Jan Kirby, before a council chamber that was packed with special guests.

Cllr Hodgkins, who is married to David, has two children and four grandchildren, was first elected to the Borough Council in 2011. It is Cllr Hodgkins' second term as Mayor of the Borough, having previously served as Mayor in 2013 to 2014.

During her year, Cllr Hodgkins will be raising funds for Concordia Theatre, Hinckley and Brain Tumour UK.

Her minister will be Minister Peter Bolton, of Hope Community Church, Hinckley.

Away from the council, Cllr Hodgkins likes hiking and motor cycling.

Councillor Ted Hollick was chosen as the Deputy Mayor and his Consort will be his wife Mrs Ann Hollick.