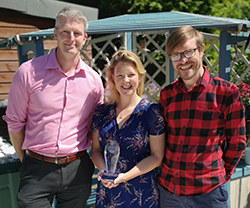 The #Islastones #photo #post #rehide campaign has won a prestigious national award from the Association of Town and City Management (ATCM).

The campaign won over the judges and beat off competition from towns and cities nationwide to win the Best Social and Community Contribution award at last night’s (26 June) ATCM gala dinner in London.

Hinckley & Bosworth Borough Council submitted the entry with the #Islastones team, showing how the campaign had brought the whole community together to raise the profile of childhood cancers in memory of seven-year-old Isla Tansey who lived in Hinckley.

The award is made every year to recognise an outstanding scheme that does not carry a direct profit motive for the local business community but is about being good corporate citizens.

Isla and her family started the #islastones campaign last year after she was diagnosed with a rare form of incurable spinal cancer called DIPG, encouraging people around the world to paint and hide stones, posting pictures of them online for her to see while raising awareness of her illness.

Pebbles were painted and hidden in all seven continents and the #islastones facebook group reached more than 72,000 members.

In the hours following the news of Isla’s death in July 2018, friends and supporters paid their respect to Isla by laying stones, flowers and other tributes in the bandstand in Argents Mead in the centre of Hinckley. The Borough Council initially worked closely with Isla’s family and #Islastones supporters, reaching out to people through social media and making practical arrangements to welcome the tributes and help the community to share their loss.

Judges were impressed with the way the community and local businesses worked together and did whatever they could to pay tribute to Isla. From practical help such as refilling water in vases, taking care of tributes, donating stones and art materials to displaying posters and helping to spread the word, many local businesses stepped up to be part of the #Islastones campaign in the town.

Isla’s legacy continued through the summer of 2018 with a celebration of her life in Argents Mead which was attended by hundreds of people in July to a special exhibition of #Islastones at The Atkins Building in August. A local quarry kindly donated a 6.2 tonne granite stone which has since been installed with a plaque donated by a local stonemason as a permanent tribute to Isla in Argents Mead.

One year on and the #Islastones campaign has charity at its heart and continues to help to find a cure for childhood cancers by raising £73,000 to fund a dedicated ‘Isla Smiler’ DIPG Trial’s Researcher, through events, stone painting, sales of calendars, car stickers, cake sales, bag packing at local supermarkets and more.

#Islastones has been an example of wonderful community spirit which has contributed to our town coming together to raise awareness in many positive and imaginative ways. The campaign was very much community led, with officers at the Borough Council listening carefully and responding to the views of Isla’s family and supporters and working with them to achieve their aspirations and we’ve all been so proud of the way the whole community has come together to support this campaign. We’re delighted to see this award celebrate that achievement and hope it helps to draw attention to this important cause.

We just want to thank Hinckley & Bosworth Borough Council, our #islastones admin and supporters and the local community for all their continued support and kindness. As a family we are devastated at the loss of our beautiful daughter but this award means a lot and will help us to continue raising awareness of DIPG and other childhood cancers, but also keep spreading smiles.