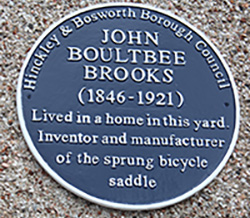 The great grandson of the inventor of a famous saddle was the special guest of the Mayor when a blue plaque dedicated to his ancestor was unveiled.

The plaque has been installed in Brooks Yard, Stockwell Head in Hinckley to mark the birthplace of John Boultbee Brooks, who invented the sprung Brooks saddle in the 1880s.

Travelling to Hinckley from his home in Harpenden, Herts, Brooks’ ancestor Brian Yates was delighted to see the blue plaque, which was funded by the Borough Council, as part of the scheme that aims to commemorate the link between notable figures of the past and the buildings in which they lived or worked.

Mr Yates was the principal guest as the borough's first citizen, the Mayor, Councillor Lynda Hodgkins, unveiled the plaque, accompanied by her consort David Hodgkins.

How many people have learnt to ride a cycle astride a Brooks saddle and never realised that its originator first came from Hinckley? The council's blue plaque installation programme really gives a sense now of which 'Hinckleyans' contributed to the wider world.

According to family legend, the invention came about when John Boultbee Brooks, who was a horse saddle manufacturer, tried to use a bicycle after his horse died but found the wooden seat very uncomfortable. As a result, he vowed to set about solving this problem and Brooks sprung saddles was born.