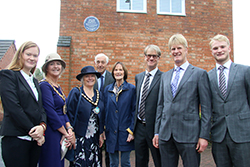 A BLUE PLAQUE celebrating the establishment of the Pukka Company has been unveiled in Earl Shilton.

Hinckley & Bosworth Borough Council and Earl Shilton Town Council have honoured the site of the former bakery in the Hollow, Earl Shilton where the business began in 1963 as part of the scheme that aims to commemorate the link between notable figures of the past and the buildings in which they lived or worked.

Originally known as Trevor Storer’s Home Made Pies, the business produced 1,200 meat pies in the first week and turned over £12,000 in the first year.

Trevor Storer baked his pies on Mondays, Wednesdays and Fridays and sold them, mainly to pubs, on Tuesdays, Thursdays and Saturdays. In 1964, at his wife Valerie’s suggestion, it was named Pukka Pies. The Pukka customer base gradually spread throughout the Midlands and then nationwide.

Today, the independently run family business is called Pukka to show they also bake pasties and sausage rolls. It is currently run by Trevor and Valerie’s sons, Tim and Andrew, and employs 360 people at its bakery in Syston, producing 180,000 pasties per day.

The plaque was unveiled by Mr Storer’s widow, Valerie, who was accompanied by members of the Storer family, along with the Mayor of Hinckley & Bosworth, Councillor Mrs Lynda Hodgkins, and Earl Shilton Town Mayor, Councillor Chris Coe, plus other invited guests.

It was an honour to be part of this presentation. Pukka Pies is a nationally recognised household name and the blue plaque is a fitting tribute recognising the connection with the local area and the dedication and hard work of Mr Storer.