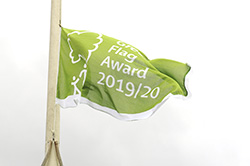 TWO HINCKLEY parks are officially among the best in the UK after they were each awarded a much coveted green flag - a prestigious accolade that is only awarded to the very best parks and green spaces.

Argents Mead collected its third Green Flag Award, recognising the Borough Council's substantial investment in the town centre park over recent years, with the opening of the new leisure centre followed by the creation of a new children's play area and the restoration of the fountain feature in the moat.

And in a double celebration for the town, Hollycroft Park has also been awarded a Green Flag - the tenth year that Hollycroft's environmental excellence has been acknowledged by the scheme.

The town parks number among a record-breaking 1,970 UK parks and green spaces to be awarded a green flag this year, the mark of a quality park or green space.

This international award, now into its third decade, is a sign to the public that the space boasts the highest possible environmental standards, is beautifully maintained and has excellent visitor facilities.

We know how much quality green spaces matter to residents and visitors, and this award celebrates the dedication that goes into maintaining Argents Mead and Hollycroft Park to such a high standard.

Thanks are due to the staff at the council, and in particular, the Friends of Hollycroft Park Group, for their dedication and hard work that has helped Hollycroft Park to get this much deserved award once again.

It’s fantastic that we have more Green Flag Awards in the UK than ever before, joined this year by 131 International winners.

Each flag honours the thousands of staff and volunteers who work tirelessly to maintain the high standards demanded by the Green Flag Award. We congratulate each and every winner on their fantastic achievement.