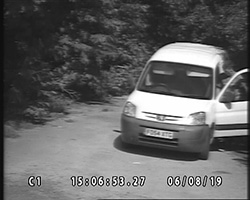 Rushcliffe Borough Council is appealing to members of the public for help to identify individuals involved in an alleged fly-tipping incident in Gotham.

Two males in a white Peugeot van were caught on CCTV reversing into a lay-by on Gypsum Way in the village and in less than two minutes, dumping an estimated 200 kilos of green waste before driving away.

The incident took place just after 3pm on Tuesday 6 August and the authority is asking residents to report any sightings of this vehicle, registration number FD54 XTG or identify those involved.

Fly-tipping is a senseless crime that we will always tackle with the strongest possible enforcement in Rushcliffe.

Anyone who has information on the vehicle and individuals in this image should contact us on social media, over the phone on 0115 981 99 11 or email customerservices@rushcliffe.gov.uk

Fly-tippers are warned we are watching and prepared to do everything in our power to prosecute those found to be flouting rules and we will also consider seizing and disposing of vehicles related to such selfish crimes that blight our borough.

The registration plate of the vehicle links to an address outside the borough that is now unoccupied and work is ongoing with partners to potentially locate the van.