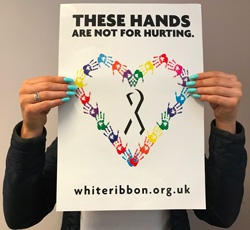 A series of events will be held this month as part of the Borough Council’s ‘White Ribbon’ pledge to support and protect victims of domestic violence.

The White Ribbon campaign asks people to take a stand against gender-based violence in all forms by making the promise to never commit, excuse or remain silent about violence against women.

Whilst this promise is aimed at taking a stand against violence against women, the council’s ongoing work also highlights and supports male victims of domestic violence.

White Ribbon Day on 25 November marks the beginning of this year’s '16 Days of Action', an international period of activism where people around the world unite to raise awareness about gender-based violence, challenge discriminatory attitudes and call for improved laws and services to end violence against women for good.

The Borough Council has a number of plans for 16 days of action starting on White Ribbon Day which will include raising awareness of domestic abuse and the support available within our community, working with young people and schools to highlight healthy relationships in young people, raising funds for victims, staff training, working with service users to enter a Christmas Tree at St Mary’s Christmas Tree Festival and sharing messages on social media.

The council’s domestic abuse outreach team provides support for around 120 victims of domestic abuse every year and its children’s service works with young people therapeutically who have been affected by domestic abuse.

Community Safety and Performance Manager at Hinckley & Bosworth Borough Council, Rachel Burgess said: “Together we can raise awareness of domestic abuse and encourage more people to report it.  Domestic abuse in any form is totally unacceptable and we must stand together, to tackle it. We want all victims in our borough to know that support is available.”