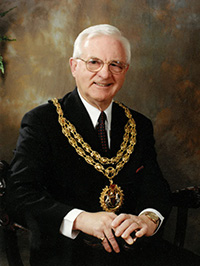 TRIBUTES have been paid to a former Mayor of Hinckley and Bosworth who has died.

Geoff Payne served as a Liberal Democrat councillor for Hinckley Clarendon ward from 1995 to 2000 and was Mayor of Hinckley & Bosworth between 1998 and 1999.

Geoff was a larger than life character with a wicked sense of humour which he used to good effect especially on social occasions. He took a particular interest in the Herford link following on from his National Service where he served in the army during the Suez crisis in the 1950s. I and my fellow councillors offer our condolences to his family.

A funeral service is to take place at St Marys’ Church, Church Walk, Hinckley at 1:45pm on Friday 31 January 2020. This is a church service to celebrate Geoff Payne's life to which colleagues and friends are warmly invited. This will then be followed by a private family cremation. Donations, if wished, may be made payable to the Royal Hospital Chelsea, c/o G Seller & Co Ltd 01455 637457. The family hope as many people who knew Geoff as possible are able to join them for this celebratory service.