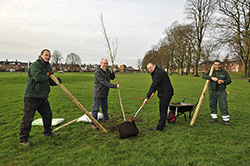 Hinckley’s Queens Park is now even greener after a new avenue of eight heavy standard trees were planted this week.

The new trees comprise native species of lime, maple and disease-resistant elm that have been selected to provide diversity and a more sustainable landscape. The 3.5 metre high trees have girths of around 10 to 12cm and are believed to be at least 10 years old.

Four of the new trees are a disease-resistant elm species. The varieties, called Ulmus New Horizon and Ulmus Rebona were chosen as they most closely resemble native elms lost to Dutch elm disease, a virulent fungal infection that wiped out many of Britain’s elm trees in the 1960s and 70s. Now that disease-resistant species are available, elms are gradually being re-introduced.

When mature, the trees will form an attractive rounded canopy with fresh green leaves which will continue to look fresh even in drought conditions. The elm varieties share the same features as the native elm and as such can be host to the extremely rare native White-letter Hairstreak Butterfly which is an endangered species after Dutch elm disease all but decimated its natural habitat.

It’s really encouraging that the availability of these disease-resistant species means we can start to plant these magnificent trees once again. We love our green spaces in the borough and the new trees will replace what we have lost and make our green spaces even better for future generations. Planting trees is one of the simplest ways of removing carbon emissions from the atmosphere and it’s just one of a number of measures we are taking to tackle climate change.