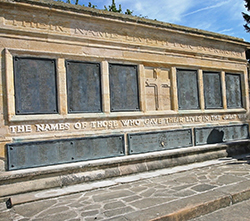 HINCKLEY’S WAR MEMORIAL is set to be restored to its former glory this summer after the stone on the monument suffered weather damage.

The Borough Council is seeking listed building consent for the works to be completed by a specialist stonemason after some of the original wording on the memorial, which dates from 1922, had become weathered and unreadable in places. The mason is also set to repoint sections of the monument and consolidate small areas of cracked stone.

The memorial commemorates the names of the 622 people from Hinckley who died in service during the first and second World Wars and in subsequent conflicts.

Specialist stonemasons Capitol Stone from Nottingham are expected to complete the £7,400 scheme, which is being funded by the Borough Council.

I am delighted these works are being planned for this year. The war memorial is an important reminder of the sacrifices others have made for us and so we share a duty to ensure that it is cherished and conserved for future generations.

It is important that all age groups, young and old, have the continued opportunity to appreciate and pay their respects to those who made the ultimate sacrifice. It is hoped that the public can see the restoration works in all their glory later this year at the Service of Remembrance should coronavirus restrictions allow.