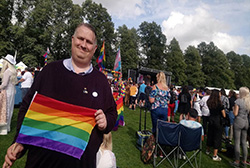 An important opportunity, each year, to take a stand against those who perpetuate hate and target other human beings because of who they are, who they love, or what they believe.

Hate based crime, whether expressed verbally or physically, is never, ever acceptable. Yet, sadly, the figures show hate based crime is increasing. A Home Office report released last year showed overall hate crime had more than doubled since 2012/13.

On the very day that I write this, new figures reveal that reported homophobic hate crimes have almost doubled in the past five years. New figures, obtained and reported by the BBC, from all of the 45 police forces in the UK, show the number rose from 6,655 in 2014/15 to 18,465 in 2019/20.

Such incidents can and do have a devastating and long-lasting impact and effect on the victims. The Home Office report I mentioned earlier also found a 37% increase in transphobic hate crime from the previous year.

These figures, reflecting reported hate crimes, are sadly likely only the tip of the iceberg, as we know many victims of hate crimes can often feel too traumatized to call the police or feel that doing so will make no difference.
But reporting such incidents is vitally important as it gives the police better data and a more complete picture of what the situation really is.

As part of the ‘True Colours’ LGBT+ events partnership in Hinckley and Bosworth, I know that the Borough Council’s Community Safety team, alongside the police, works tirelessly to make our communities as safe as possible for everyone.

So, this week, we repeat that there is no place for hate.

And that stopping hate starts here.

At the meeting of the IAG this week, I shall be lighting a candle in memory of those people who have lost their lives as a result of a hate crime.

In their memory we must all redouble our efforts to stand against those who hate others.

To say that, in our society and communities, our diversity is our strength.

And to always remember that Love Trumps Hate.