What is the Armed Forces Community Covenant? 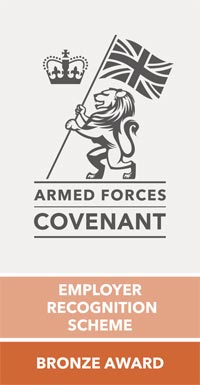 On 8 April 2014, Hinckley & Bosworth Borough Council pledged support for its local armed forces community through the signing of a covenant. Representatives of the Ministry of Defence and voluntary sectors from the civilian community of Leicestershire joined representatives from the armed forces community in Leicestershire to sign the covenant. The covenant was subsequently refreshed in January 2021.

The covenant is a voluntary statement of mutual support, which encourages each party to bring their knowledge, experience and expertise to bear on mutually beneficial matters, in which both communities can share.

Three years later, the Borough Council was awarded the bronze award from the Armed Forces Covenant Employer Recognition Scheme (ERS). The scheme comprises bronze, silver and gold awards for employers who support those who serve or have served in the armed forces and their families.

The updated pledge, the full community covenant and our bronze award certificate are available to view on our website.

The covenant is part of a national initiative to support the armed forces. Hinckley and Bosworth are proud to be one of more than 200 local authorities who signed a Community Covenant Pledge.

By signing this pledge we agree to:

The Armed Forces Covenant website enables all those who benefit from the covenant, and those that can support it, to find the information they need in a clear and easily accessible format.

In 2007, the council granted freedom of entry to the borough of Hinckley & Bosworth to the second Battalion Royal Anglian Regiment (Poachers).

The council supports the national initiative to fly a flag for Armed Forces Day. The raising and flying of the Armed Forces Day flag in Argents Mead provides a high profile opportunity to raise awareness of the role our armed forces and their families continue to play.

The council co-ordinates arrangements for marking Remembrance Sunday in Hinckley and Bosworth. This involves the mayor alongside other civic dignitaries leading a public act of remembrance in Argents Mead and hosting a parade of local regiments through the town, which on occasions includes presenting medals to members of the armed forces. The mayor will also attend other remembrance services around the borough during the day.

The Borough Council recognises the importance of marking Armistice Day. A two minute silence is commemorated at the council offices. Both events provide the opportunity for members of the public, councillors and staff to observe the armistice in silence and reflect on previous wars and the sacrifices made by members of the armed forces.

The council has included special qualifying provisions in recognition of recent government guidance in its revised housing allocations policy to ensure that members of the armed forces are not disadvantaged by the requirement to have a local connection to qualify for inclusion on our housing register and therefore access to social housing.

Downloads relating to the Armed Forces

The contact for the Armed Forces support and the Community Covenant