THE BOROUGH COUNCIL has set aside £10,000 in a bid to tackle speeding motorists in areas of Hinckley. 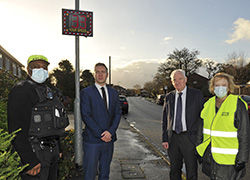 The funds will pay for a digital sign (an MVAS box) to inform motorists of the speed they are driving at and record vehicle speed as well as the posts needed to put the sign in place. The funding will also support Neighbourhood Watch who take an active role in tackling speeding in this area.

The money was pledged at the council’s Hinckley Area Committee meeting, which took place in November after considering the request from the police, Neighbourhood Watch (NHW), ward councillors and the community safety team.

The Hinckley Area Committee gives consideration to budget and spending matters relating to the Hinckley special expenses area which all Hinckley residents contribute to.

Once purchased, the new sign will be portable and can be used in various locations. It will be monitored by Neighbourhood Watch teams who will progress action with other partners such as the police, community safety and the county council.

We have had one MVAS box for a number of years. However, having just one box means we can’t cover as many locations as we would like to since the box has to be up for a few weeks and then taken down. Results then need to be assessed before it’s placed in another location.

This funding will help to cover more areas that have been highlighted as areas of concern by residents. This means that data can be collected on a regular basis and, if further action is needed, we can liaise with the county council to tackle the speeding issues in that area.

These devices will soon be installed all over Hinckley. I hope they will be seen as an early Christmas present from ourselves as local councillors, the Neighbourhood Watch and the Police all working together to try to make our streets safer from irresponsible driving.

This coincides with another breakthrough. This week the long anticipated 40 mph signs have been uncovered on the northern perimeter road. The lowering of the speed limit between Roston Drive and Stoke Road was one of the measures we were able to impose on the back of the Bloors development which is rapidly taking shape alongside the road. These two schemes should make a real contribution to making our roads safer for all of us.

It is imperative that the police work in conjunction with our partners at Hinckley & Bosworth Borough Council (HBBC) to tackle issues of speeding. Speeding remains a priority for the police and I am grateful to HBBC in making further investment in a MVAS box. The data received will assist the police in being able to target certain locations at the right time to assist in casualty reduction.